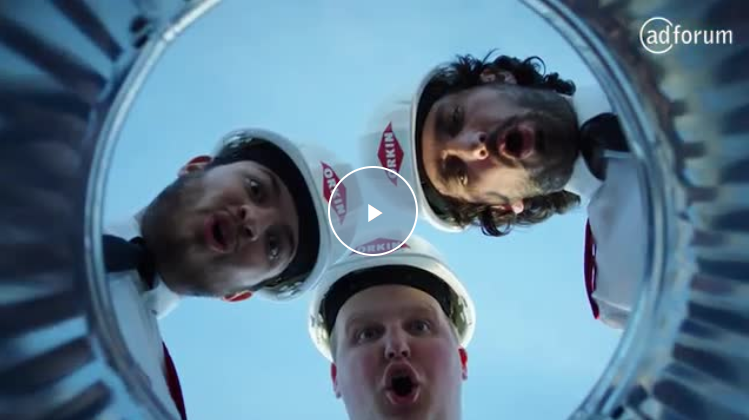 On a crisp July morning in Amsterdam, Seth Mollerup and I were on the tail end of a six-week advertising study abroad with our Professor Jeff Sheets and the BYU AdLab. Our trip started in Cannes, France, where we attended the International Festival of Creativity before continuing a tour of art, architecture, agencies and award shows. The experience inspired our group of students to think bigger and create even more ambitious work—work we were passionate about.

Eight months later, we had developed two ad concepts in partnership that we felt were more than assignments and reflected who we are as individuals. The first piece was a musical spot produced for Orkin Pest Control. The spot, an homage to Rodgers and Hammerstein’s The Sound of Music, was a fun and fresh take on an industry that’s traditionally focused on hard sells. The second piece was an emotional look at truth and journalism for the New York Times using a famous monologue from Steinbeck’s The Grapes of Wrath.

As a result of putting our hearts into these projects, they turned out better and smarter than anything we had done before. Excited about the pieces we had made, our professors encouraged us to submit the work to various award shows. It’s both exciting and terrifying to put your work in front of industry professionals; if they validate your work, then your abilities as a creative are also validated. But neither of us could have anticipated the validation we would receive due to the ANDY Awards Meta Live Event.

A few weeks after submitting, I woke up to a call from a representative at The ADVERTISING Club of New York. She explained that our Orkin and NYT projects were both finalists for the top student prize, and asked whether we’d be willing to Skype with a live panel of judges later that afternoon. We began to sweat—it would be a live interview with fifteen or more CCOs and top executives from around the world.

When the judges Skyped me in, the first words Pete Favat (North American CCO, Deutsch) said were, “When do you start at Deutsch LA? Can you start on Monday?” It was in this moment that Seth and I realized this event was going to have a much more profound effect on our lives than we ever could have imagined. We weren’t just in the running for a trophy, we were literally in the running for our first jobs. We immediately called each other to talk about what a humbling and empowering experience it had been to watch top industry professionals applaud our work.

The biggest lesson we learned from this experience is the effect an awards show can have on your marketability in the industry. If we didn’t attend a school that encouraged us to submit our work to be judged, then Seth and I could’ve made ten Orkin spots and never seen anything for our efforts. The publicity we received from the awards show platform was invaluable. The weeks following the ANDY Awards, Orkin was featured in top industry publications, national and local news outlets covered our success, conversations with industry creatives and agencies resulted in multiple internship offers and full-time job offers. Again, all of this was the result of entering into one award show.

We’re both grateful for everything that happened because of the ANDY Awards. And we are honored to have gone through the BYU AdLab where we learned so much about our craft and received stellar mentorship. And now it’s a hot, June afternoon as we look out the window of Ogilvy in downtown Chicago. What a big difference entering an award show can make!