In partnership with Attention, Eleven and Snaps, campaign seeks to take a stand for inclusion

The ADVERTISING Club of New York, in partnership with Attention, a social media agency and part of the KBS specialist network, Eleven, a San Francisco-based independent agency, and Snaps, a mobile messaging platform, today launched the Club’s i’mPART diversity campaign to raise awareness of the need for and importance of diversity and inclusion across all industries.

Recognizing that social media is one of the fastest ways to spread messages among communities and borders, the campaign calls on individuals around the world to amplify and spread the diversity message across all of their social media networks. Participants will have the ability to apply a profile picture overlay as well as post diversity messages to their social media accounts using the hash tag #imPARTofDiversity to stress the importance of this initiative.

“We’re thrilled to be launching the i’mPART social media campaign,” said Tiffany Edwards, Foundation and Inclusion Manager at The ADVERTISING Club of NY. “We believe that Diversity isn’t just a number or a percentage. It isn’t just race, creed, gender or sexual orientation. And Diversity isn’t just a box to check or “the right thing to do.” Diversity is inclusion, variety and different perspectives, and together, we can make an impact.”

i’mPART, which stands for the Club’s movement to Promote, Attract, Retain and Train diverse talent, was launched in 2012 and is an ongoing initiative supported by MEDIACTION, the AD Club’s largest fundraiser. To date, MEDIACTION has raised nearly $2 million in funds, which has allowed i’mPART to support many leading diversity programs including college scholarships and career training opportunities for industry professionals.

“It’s our duty as marketers to call attention to this issue in the field,” said Tom Buontempo, President at Attention. “We want to leverage social media to rally individuals behind a movement that is important not only in our industry, but in all industries.” Monique Verrier, Director of Creative Services at Eleven added, “As communication and creativity become more global, agencies need to form diverse teams to hit the mark more successfully. The i’mPART campaign is an excellent first step and call to action. We didn’t hesitate lending our creative expertise to make this campaign a reality.”

“The AD Club takes our role as an aggregator of the industry’s top leaders very seriously, and i’mPART is an important initiative for the Club and our members,” said Gina Grillo, President and CEO of The ADVERTISING Club of NY. “We encourage anyone who stands for inclusion to be a part of this movement.”

Participants can participate by accessing the website, www.makesnaps.com/imPARTofDIVERSITY. The campaign strategy and social overlay were created by Attention, microsite and overlay toolkit conversion built by Snaps, and creative assets including an online banner ad were developed by Eleven. 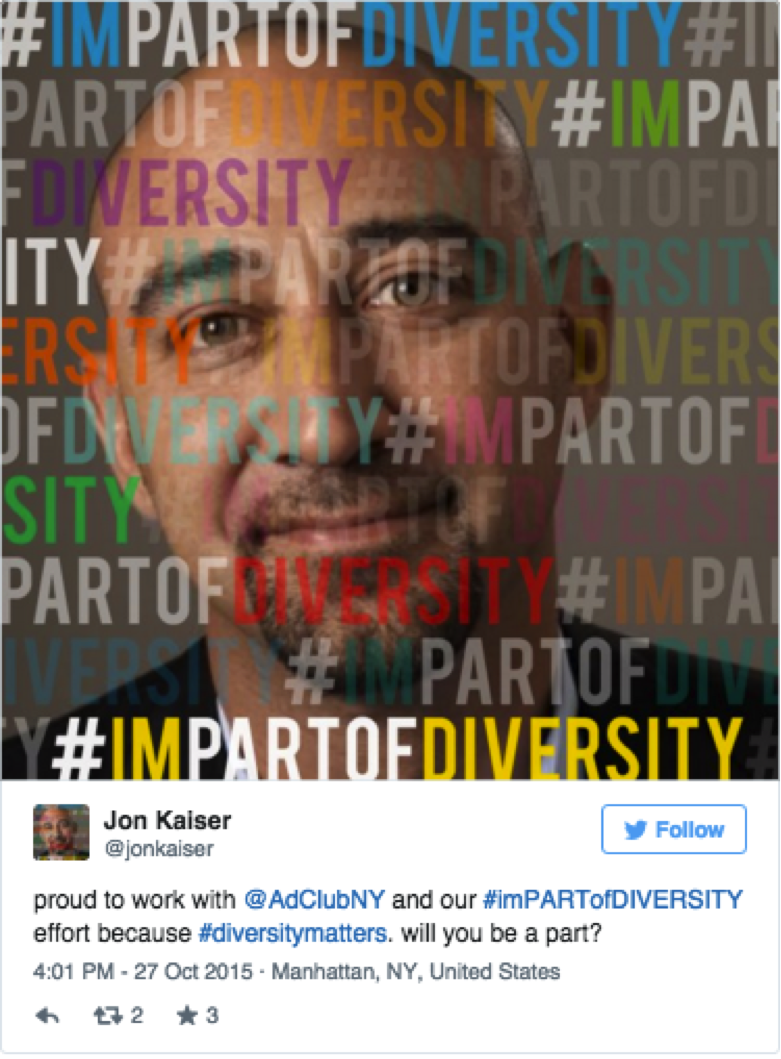 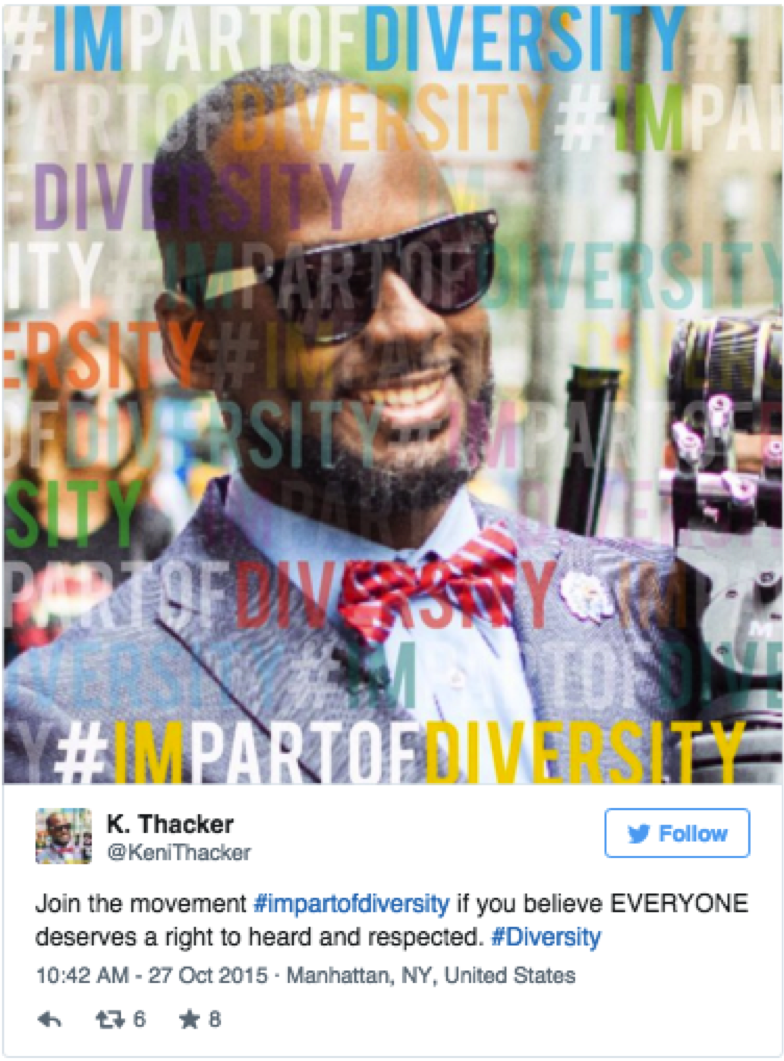 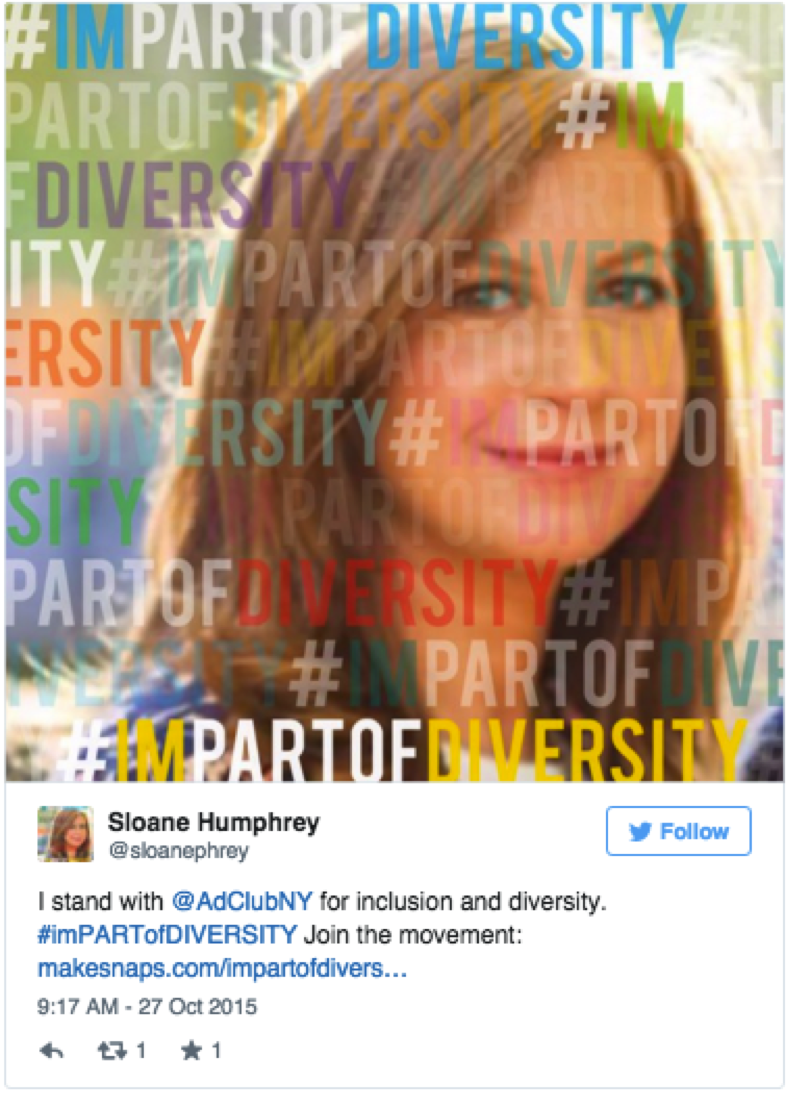