At last night’s annual Golden Globe Awards, Amazon – AD Club Corporate Member, International ANDY Awards Sponsor, and friend – made history with a revolutionary win for “Transparent.” There were multiple firsts at the event: not only was this Amazon’s first-ever Golden Globe, but it was also the first online series to ever win a best series award. This is a celebration of true acts of bravery in our industry and a sign of the positive change all around us. Read the full story below! 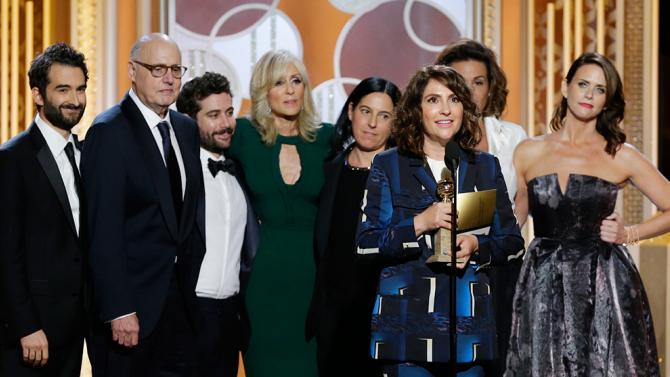 Amazon proved itself a major player in the television field when its original program “Transparent” won the Golden Globe for best TV series, musical or comedy and star Jeffrey Tambor won best actor.

Not only was it Amazon’s first-ever Golden Globe award, “Transparent” also became the first online series to ever win a best series award, comedy or drama, at the annual awards show.

“My new best friend,” Tambor said of the digital media company during his acceptance speech.

The series stars Tambor as a father of three who reveals he identifies as a woman. There was a lot of love for the show on the red carpet prior to the awards. “Shameless” star William H. Macy, nominated for best actor in a TV comedy, said he didn’t bother preparing a speech because “I think Jeffrey Tambor’s going to win.”

In his acceptance speech, a visibly touched Tambor noted, “This is big. This is much bigger than me. Thank you to the Hollywood Foreign Press for putting us on the map and making people aware of our story.”

On the red carpet prior to the ceremony, creator Jill Soloway admitted she considered other homes for the series, but Amazon ended up being a perfect fit. “You want to be somewhere where they’re passionate about you,” she noted. “And they’ve been wonderful.”

Transgender actress Alexandra Billings, who plays Davina on the series, admitted she was surprised by the popularity of the show. “I knew the writing was fantastic, I knew it was a great group of actors,” she said. “But to have the public embracing us the way it has is overwhelming.”

In her acceptance speech, Soloway thanked “the trans community,” adding, “They are our family. They make this possible. This award is dedicated to the memory of Leelah Alcorn and to many trans people who died too young.”

Backstage, Soloway spoke about how her own parent came out as trans three years ago. “It was a lot,” she admitted. “A big announcement. And my first thought was, ‘I love you, I’m proud of you, thank you for being you and telling me who you are.’ My second thought, a couple moments later, was, ‘I think i have a TV show.’”

Soloway elaborated that at that point, she knew little about the transgender community. She thanked Amazon for taking a risk, noting, “The content of the show is transformative.”

A visibly choked up Tambor thanked Soloway for the opportunity, noting, “I’m 70 years old, these (roles) don’t come along.” He added that he was grateful, “Not for the reviews or for awards…just to get it right. I’m just honored.”

**This article originally appear on Variety.com
Posted in News