NEW YORK — June 25, 2019 /PRNewswire/ — In support of World Pride Month, OUTFRONT Media Inc. (NYSE: OUT) is inviting Pride supporters to rally together and openly express themselves on one of the largest digital canvases in Times Square and throughout the New York City subway system. Beginning on Monday, June 24 through Sunday, June 30, people across the United States can take part in the company’s ‘Share Your Pride’ social campaign by sharing their stories and messages of love, support and hope. 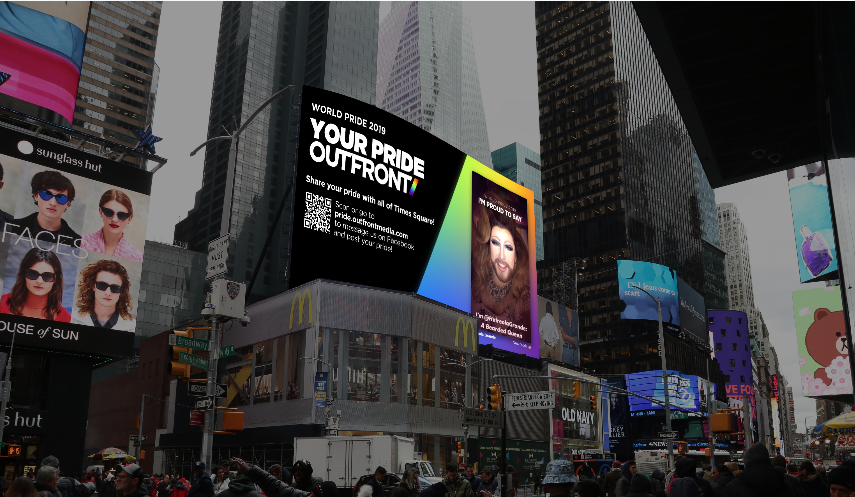 Pride supporters will have the opportunity to appear in Times Square by taking selfie videos using the OUTFRONT Media Pride Meta Effect. Participants will complete the headline “I’m Proud to Say…” with their personal message, which will be displayed across an OUTFRONT digital billboard in New York City’s Times Square and subway system during the World Pride closing ceremony on June 30th.

“At OUTFRONT Media, we have the capability to influence, engage and interact with millions of people every day,” said Jason Kuperman, Chief Product Experience Officer at OUTFRONT Media. “We are always thinking about new ways to leverage powerful creative messaging through the use of emerging technology.  With this campaign we’ve done just that by giving Pride supporters a unique creative outlet to express their love digitally and amplifying these messages of support to New Yorkers and beyond.”

OUTFRONT Media understands what excites and engages audiences on the go, whether it be information to help people during their commute, entertaining or informative content, or messages from the companies they interact with on a day-to-day basis. With this campaign, OUTFRONT Media highlights the people that make up the true meaning of Pride – the friends, families, coworkers, neighbors, etc. that build the foundation of support for Pride communities across the United States and represents OUTFRONT’s commitment to Diversity and Inclusion.

“When dreaming up this campaign, we thought about the heart of Pride month, which is to spread love and openness for everyone to feel and be who they truly are,” said Kuperman. “By providing a canvas for real people to share real stories, we are able to capture the true essence of Pride month and display it for everyone in America’s largest city to see.”

People who want to show their Pride support and see themselves in lights in Times Square can go to pride.outfrontmedia.com for information and to begin the process. Participants will be notified via Meta Messenger when their message runs. For people not in New York, OUTFRONT will be livestreaming the billboard on its Meta account during the June 30th closing ceremony.

OUTFRONT leverages the power of technology, location and creativity to connect brands with consumers outside of their homes through one of the largest and most diverse sets of billboard, transit, and mobile assets in North America. Through its ON Smart Media platform, OUTFRONT  is implementing digital technology that will fundamentally change the ways advertisers engage audiences on-the-go.